Mad Dogs Bar and Restaurant in Sherborne, needed a strong and unique brand identity to attract customers and mark their territory in the restaurant trade in Sherborne. Click the ‘See It Live‘ button to see the website and logo out in the wild… 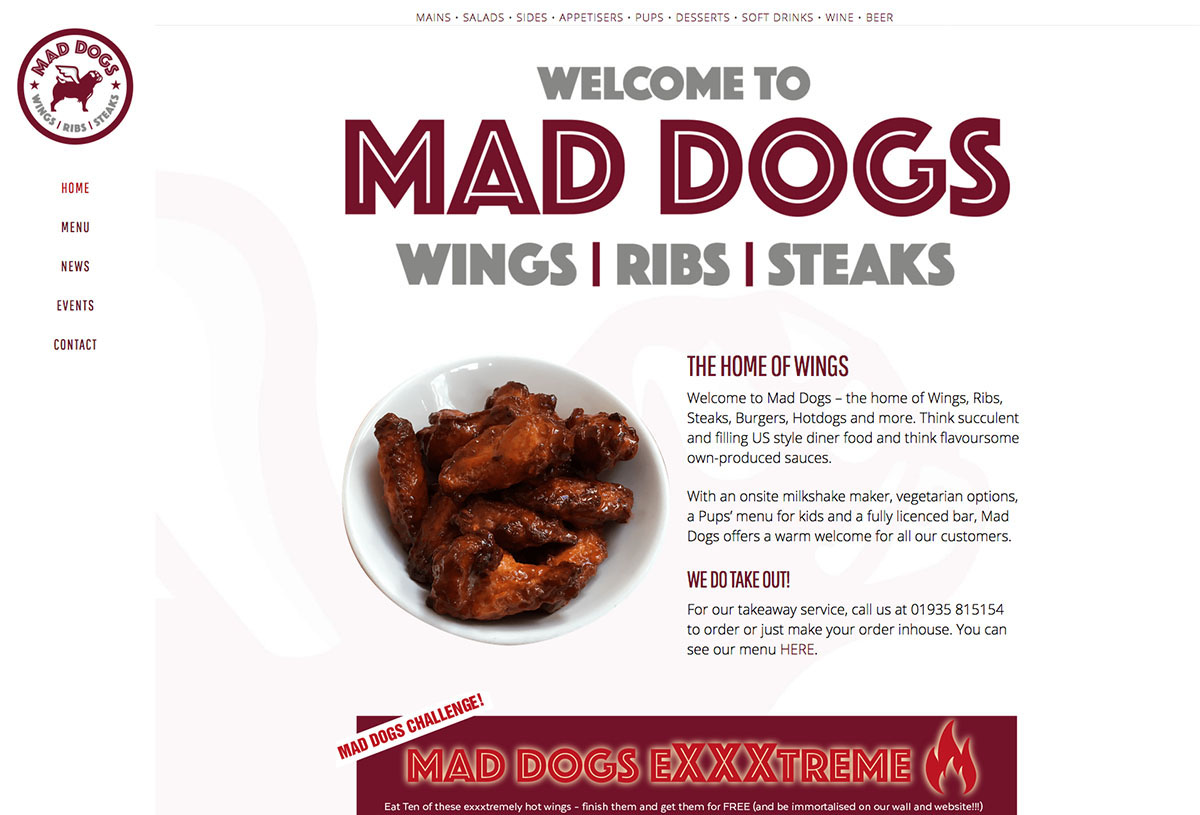 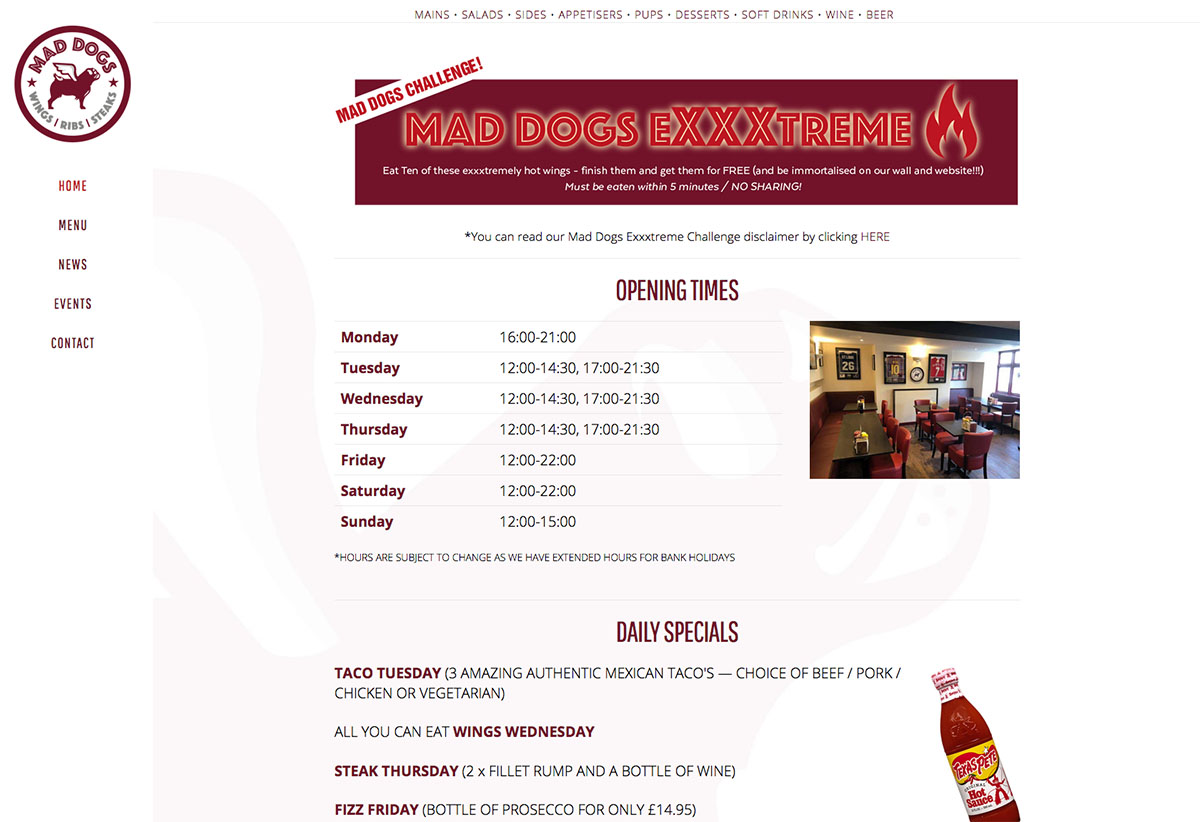 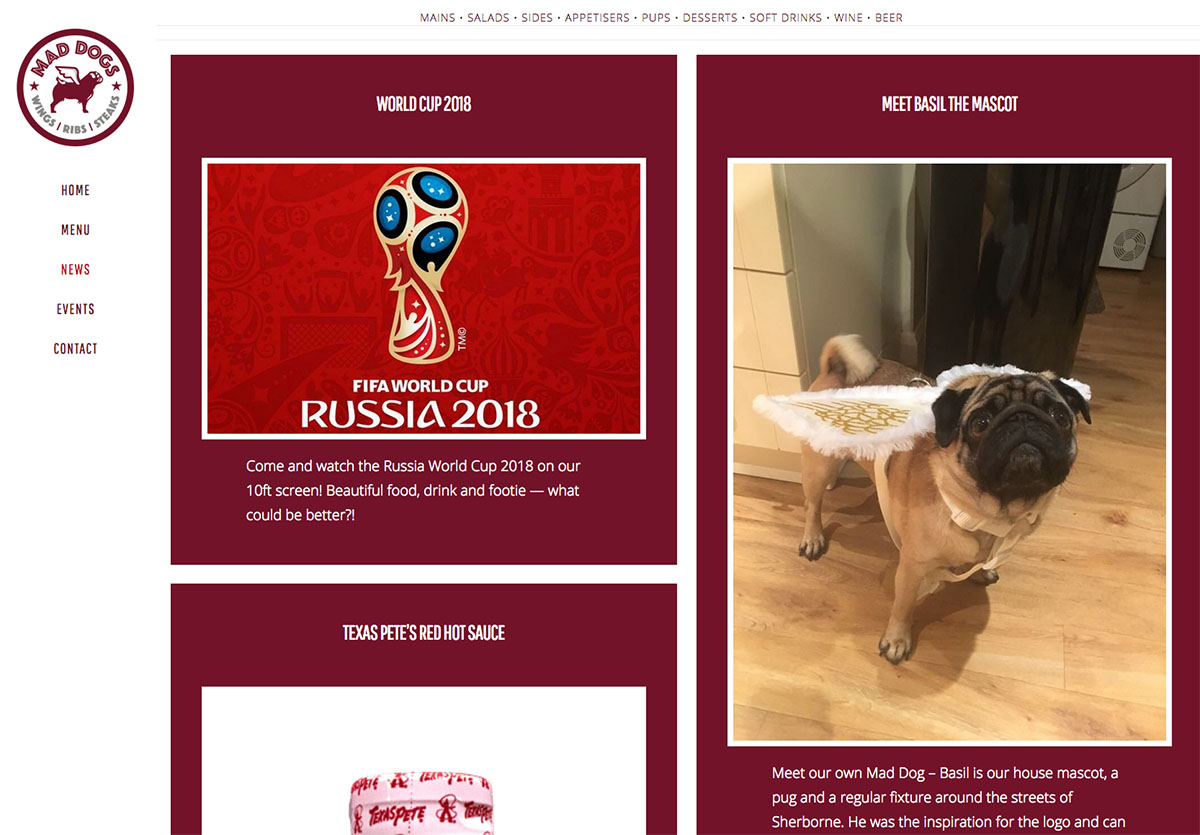 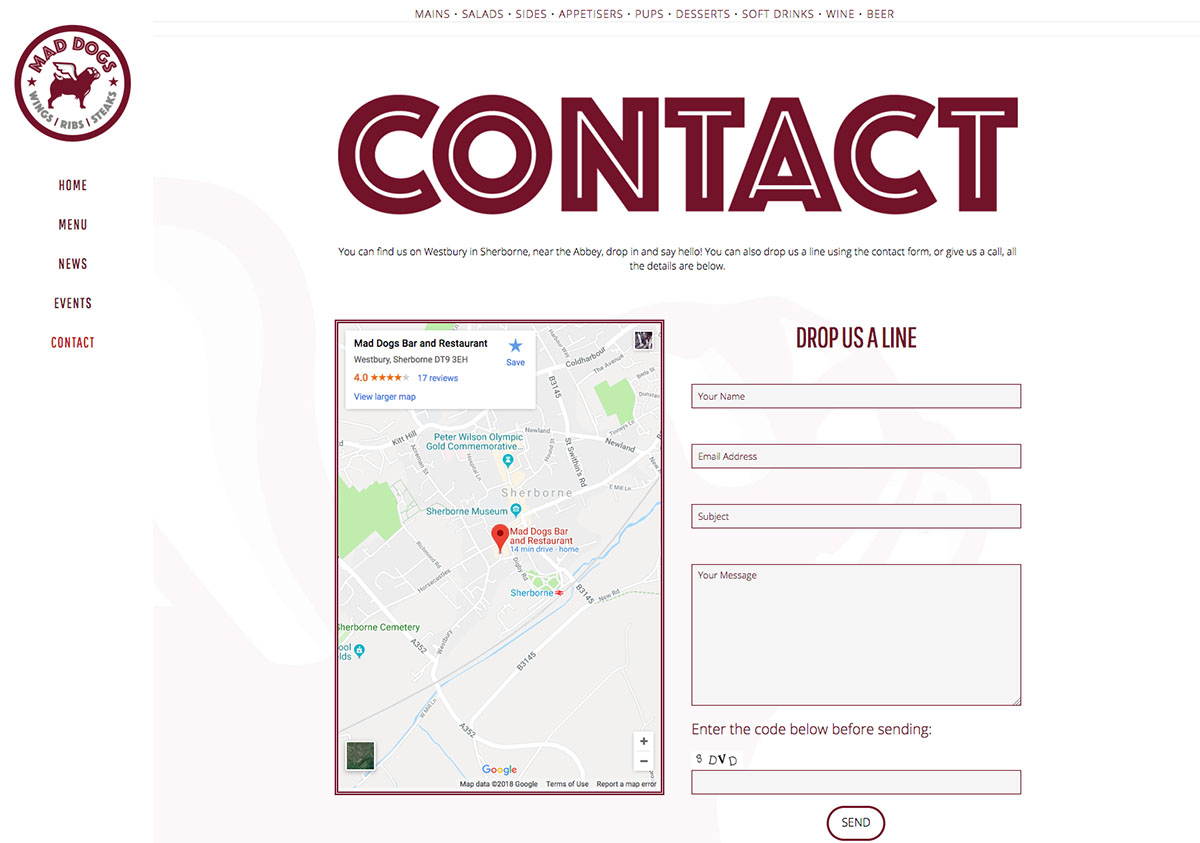 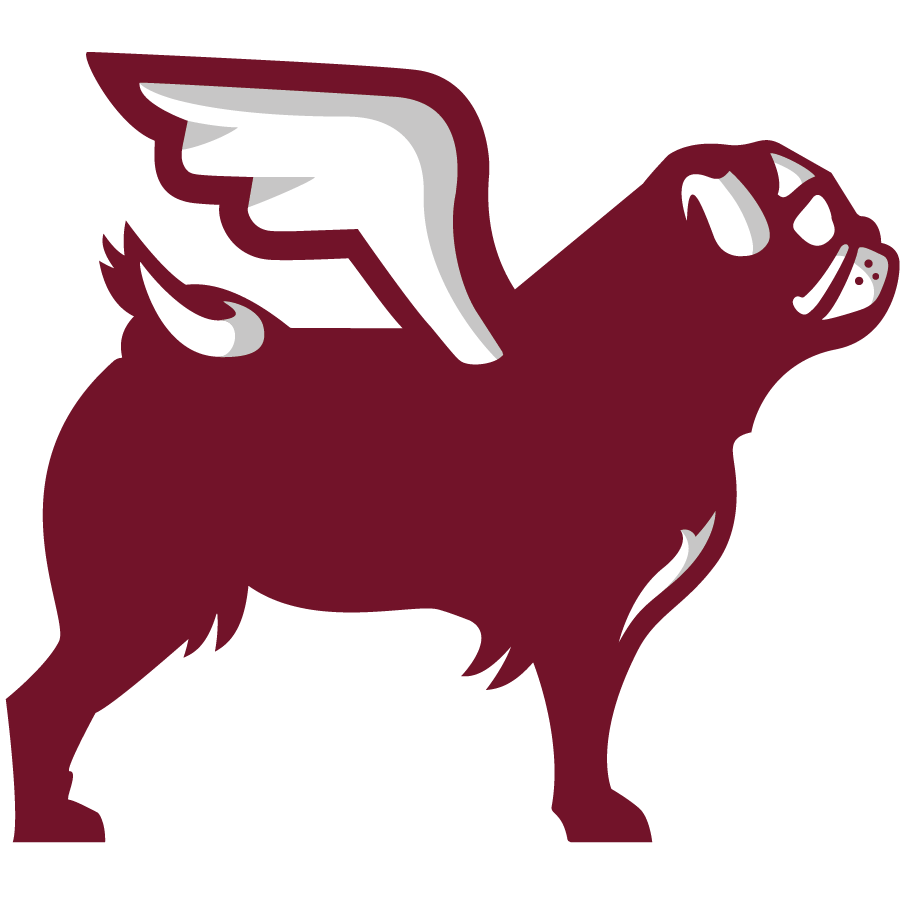 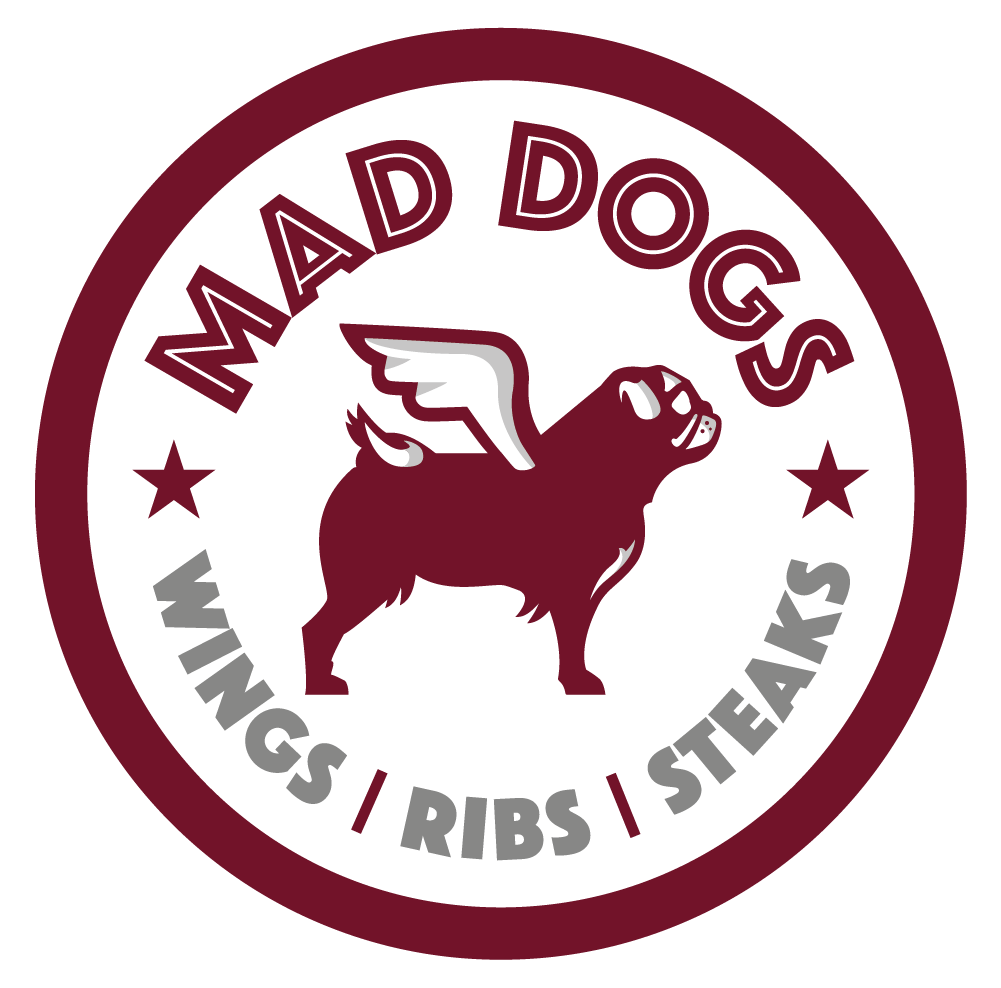 Mad Dogs Bar and Restaurant in Sherborne was a rebranding exercise. Previously, the restaurant was The Dining Room for which I also did the branding. Grant Jones at Mad Dogs decided he wanted to change tack and go for an American diner style vibe.

I was only too pleased to oblige and did a number a logos which I had enormous fun designing. Whilst the main theme was ‘American Diner’, Grant and co-owner Marek wanted to have a British edge too so I came up with the idea of focusing on the ‘dog’ aspect of the name and drew a dog as the main emblem and mascot — though a bulldog was too cliche and had undesirable connotations so I decided upon a winged pug.

The logo needed to be strong and unique because right from the start, franchising-out the brand was on the table so it needed to transfer to, and communicate easily with, all regions of the country. Once the logo and branding was complete, I then created the website and an A3 menu.

Here’s what Grant Jones of Mad Dogs said about my work:

“Matt designed us a brilliant logo on a really short deadline and we couldn’t be happier with it — lots of our customers comment on it. Matt also built us two websites, designed our menus, our signage, adverts, invitations and always to an exceptionally high standard. We’ve been working together now for four years — I wouldn’t hesitate to recommend Matt, you won’t be disappointed.”
Grant Jones, Mad Dogs

Click here to drop us a line!
We use cookies to ensure that we give you the best experience on our website. If you continue to use this site we will assume that you are happy with it.OkCookie Policy